DEMONSTRATIONS AGAINST THE MULLAHS IN IRAN

I don't know if it will be a demonstration in Gothenburg this year. Here is an excerpt from my post, DANESHJOO VERSUS MULLAH.

I went to the Gustaf Adolf's square (King Gustaf II Adolf founded Gothenburg in 1621) around 5 P.M. CET. I saw lots of red flags so I was a bit worried that the demonstration had been hijacked by the Worker-Communist Party of Iran! Luckily the "red-flag-waving commies" left before the demonstration started. It was said that the event was arranged by the Constitutionalist Party of Iran and the Iranian Student Association of Gothenburg. You have a broad spectrum of political parties and organizations involved in the Iranian ideological debate, working both from the inside and in exile. For example, I found the Iranian Renaissance Movement on I.S.A.o.G's link page. (EGO, 07/08/04.)

The Near East Democratic Association of Iran is hosting a symposium in Washington, D.C.

After the raids on university dormitories on July 9, 1999 which sparked nationwide student protests in Iran, Iranian youth have marked the anniversary of the student uprisings by taking to the streets and saying "no" to the Iranian regime in its entirety. Each year thousands of students are brutally suppressed, injured and arrested in these demonstrations. (USNewswire.com, 07/08/05.)

Iranian students will commemorate the legacy of the 1999 Students' Uprising by gathering inside and in front of the Iranian universities despite any official ban.

In addition, thousands of Iranians are expected to come into streets and squares of most Iranian cities or on their roof tops and to condemn the Islamic regime in another show of rejection of the theocracy. They will also cherish the legacy of the "Epic of the Students Uprising of July 9, 1999". (RegimeChangeIran.com / SMCCDI, 07/04/05.)

For more information, go to Free Iran News and read the Declaration Number 2: 18th of Tir (July 9th) by The National Leadership Assembly.

Check out the Iran Cartoons at Cox & Forkum.

I went to the city of Gothenburg to see if I could find any Iranians. I found a couple of people at Gustaf Adolf's square. It looked like I had missed the protest rally. They told me that it had been around 200 people gathered, including representatives from all different parties and organizations. I gave a copy of the 18 Tir cartoon to one of the demonstrators. Right before they left the square, one of the Iranians gave me a leaflet. It was issued by the Worker-Communist Party of Iran. Here is an excerpt from the leaflet:

The murder of innocent people in London is another instance in the race of terrorists, which began on September 11 on the world stage between Islamic states and movements on the one hand and western states led by the United States on the other. Both are armed to the teeth and feeding off each other. In the meanwhile, the victims of this war and slaughter are only innocent and ordinary people. (WPIran.org.)

We should hope that this group will not be in charge after the mullahs have been kicked out... 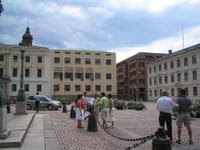 Posted by Martin Lindeskog at 02:00