VOTE FOR A DELICIOUS LIFE ON OPRAH

Here is an excerpt from Jennifer Iannolo's post, My New Mission:

I am excited about this new phase, because a whole new universe of sensory discovery awaits. I’ve heard from enough of you publicly and privately to know that I am not alone in this need for something beyond survival. If you are struggling, know that I’ve heard you.

In fact, I’ve told Oprah about you.

Oprah is currently holding an open casting call for a new star on her OWN network, so I’ve uploaded an audition video to her site announcing my mission to create a show to help people with chronic illness live a delicious life — where the illness takes a back seat to LIVING. (FoodPhilosophy.com, June 28, 2010.)

Click the link and vote for Jennifer's audition video, so she could become Oprah's next star...

Have you tasted my drink dedicated to Jennifer Iannolo of Food Philosophy?

I am for property rights, but you have to support it in a contextual way. I wonder about Imam Faisal Abdul Rauf and his plan to have the grand opening of the mosque on September 11, 2011... What kind of activities will be held linked to the mosque when you have a person who says this about Hamas and has published a book with the title, "The Call From the WTC Rubble: Islamic Da'wah From the Heart of America Post-9/11" (in Arabic: Seruan Azan Dari Puing WTC: Dakwah Islam di Jantung Amerika Pasca 9/11).

Here is an excerpt from Salah Uddin Shoaib Choudhury's article, Rauf and his mosque at Ground Zero:

The Ground Zero mosque plan is more than a little reminiscent of a program initiated by Rauf's late father in 1965. That year, Muhammad R. Abdul Rauf moved to New York to plan and head a huge Islamic Cultural Center that took decades to realize. He bought prime Manhattan real estate at 96th St. and 3rd Ave - roughly two thirds of a city block - apparently with $1.3 million in funding from Kuwait, Saudi Arabia, and Libya. The late Rauf long retained some of that land in a personal trust. But when construction started on the $17 million mosque in 1984, it had received funding from 46 Islamic nations. By 2010, the enormous Islamic complex had added another two buildings. Since 1984, its founders-envisioned apartment unit has been restricted to Muslims alone.

Whenever Feisal first considered building a mosque across from Ground Zero, he had the idea firmly in mind by 2004, when he wrote What's Right with Islam. The book was translated into many languages. In Indonesia's Bahasa, its title translates as "The Call from the WTC Rubble." Rauf promoted the book in December 2007 at a Kuala Lumpur gathering of Hizb ut Tahrir – a terror outfit banned in Germany since 2003, and also outlawed in Bangladesh, Jordan, Syria, Lebanon, Egypt, Tunisia, Turkey, and Saudi Arabia, among other places - and ideologically akin to the Muslim Brotherhood. Both seek to replace the U.S. Constitution with Islamic law [Sharia], and eventually impose Islam and Sharia law worldwide. Most North American Muslim Brotherhood organizations avoid widely publicizing that aim. The Hizb Ut Tahrir however, at a July 2009 Khalifah conference at a suburban Chicago Hilton, openly promised to replace capitalism with Islam and Sharia law. (WeeklyBlitz.net, May 29, 2010.)

You could find several cases of links between leading people of mosques in Sweden and terrorist groups. Read my posts, TERRORIST LINKED TO MOSQUE IN STOCKHOLM and AL SHABAAB MEETING IN GOTHENBURG. From the article, Swedes recruited by Somali terror group:

Somali Islamic insurgency group Harakat al-Shabab Mujahideen ("Movement of Warrior Youth"), better known as Al-Shabab, which is linked to al-Qaeda, is thought to have recruited dozens of Swedish youth to engage in terrorist acts, according to Göteborgs-Tidningen. ...

At a mosque - a converted food hall - in Gothenburg's Gamlestan quarter, a Danish-Somali man who tried to assassinate Kurt Westergaard, the Danish cartoonist who drew the controversial Muhammad cartoon published in Jyllands-Posten, tried to recruit followers, according to a Danish newspaper.

Young men in Sweden are brainwashed, trained and recruited by terrorists on Somali terrorist movement al-Shabab, according to an informant who spoke to the paper. One recruit was arrested in connection with death threats against Danish People's Party leader Pia Kjærsgaard. (TheLocal.se, May 5, 2010.)

It is important that the resistance against the building of the mosque is based on rational arguments and that you prevent that the demonstrations against it will be hijacked by "dark elements" (read: collectivists) as it happened in Gothenburg, Sweden. I think that Dr. Leonard Peikoff and Amy Peikoff have given the best arguments for not having a mosque in New York city, near Ground Zero. 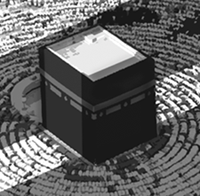 UPDATE: Read The Devastating Symbolic Attack On America by The Charlotte Capitalist.


UPDATE: 07/01/10:
Go to The Rule of Reason blog and read The Insidious Ground Zero Mosque by Edward Cline.

My post has been picked up Zimbio.
Posted by Martin Lindeskog at 15:53 No comments:

My tailor-made shirt from The Fair Tailor has arrived. 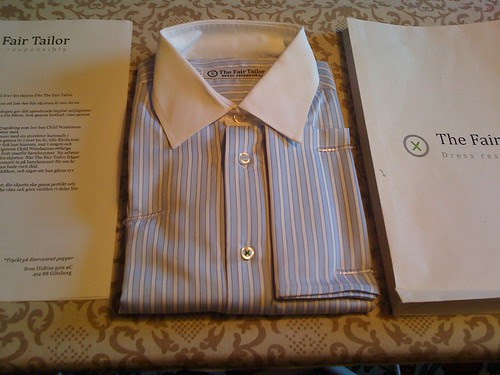 Read Sebastian Stjern's thoughtful post (Vågar du gå i konkurs?) on how different you view a company bankruptcy in America compared with Sweden

UPDATE 07/03/10:
I wore the shirt for my business breakfast BNI meeting at Quality Hotel Panorama on Friday, July 2. I mentioned The Fair Tailor during my presentation in 60 seconds. I am very happy with my purchase. It is a totally different feeling to wear a tailor-made shirt, compared with a standard shirt from a regular gentlemen's outfitter store. 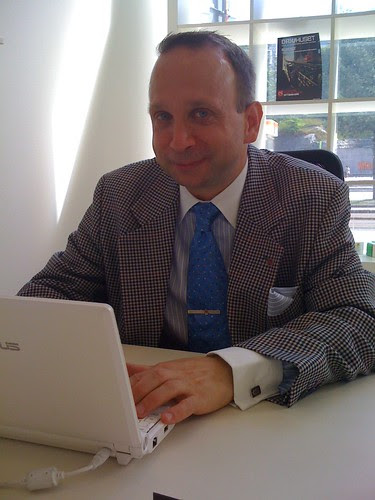 Posted by Martin Lindeskog at 01:20 4 comments:

Email ThisBlogThis!Share to TwitterShare to FacebookShare to Pinterest
Label(s): Entrepreneurship

How do you celebrate (mid)summer solstice? Read James Savage's post, The Lowdown on Swedish Midsummer and watch the banned IKEA commercial...

I celebrated the light in a relaxed way and took a chile pepper and warmed it up on an outdoor grill. Morris the cat collected sunbeams. Check out Friday Ark #301. 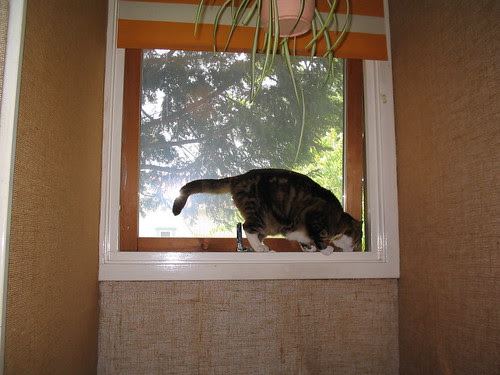 [Editor's note: This is a photo from 2005. I have problem with uploading photos at the moment. More about this issue in a future post...]

Related: My post, MIDSUMMER RECIPES.
Posted by Martin Lindeskog at 19:29 No comments:

As an American in spirit, I will add Mother of Exiles to my blogroll.

Related: My posts, USA - LAND OF OPPORTUNITY, IMMIGRATION RALLY ON MAY DAY and  The Melting Pot Bubbles with Innovative Business Ideas.
Posted by Martin Lindeskog at 11:58 No comments:

I have added tbe social connect application to the Wibiya toolbar. Read the post, Heralding the Ultimate Social Connectivity Web Application, for more information.
Posted by Martin Lindeskog at 10:38 No comments:

Take the opportunity and ask me a question by filling out the form in the right column (under the section "Recent Comments"), or by clicking the link to Formspring.me. For information on Formspring, listen to Amber MacArthur's and Sarah Lane's interview with Ade Olonoh, CEO and founder of Formspring.me.

Maybe you have a question on my new site, EGO Sole Trader, or want to know some similar curio stuff that I described in my post, SEVEN THINGS ABOUT ME.

Posted by Martin Lindeskog at 15:41 No comments: 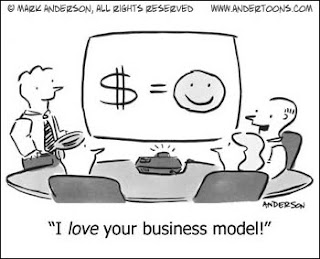 "I love your business model!"

Here is an excerpt from "Francisco's Money Speech" from Atlas Shrugged by Ayn Rand:

"To the glory of mankind, there was, for the first and only time in history, a country of money--and I have no higher, more reverent tribute to pay to America, for this means: a country of reason, justice, freedom, production, achievement. For the first time, man's mind and money were set free, and there were no fortunes-by-conquest, but only fortunes-by-work, and instead of swordsmen and slaves, there appeared the real maker of wealth, the greatest worker, the highest type of human being--the self-made man--the American industrialist.

"If you ask me to name the proudest distinction of Americans, I would choose--because it contains all the others--the fact that they were the people who created the phrase 'to make money.' No other language or nation had ever used these words before; men had always thought of wealth as a static quantity--to be seized, begged, inherited, shared, looted or obtained as a favor. Americans were the first to understand that wealth has to be created. The words 'to make money' hold the essence of human morality. (www.capitalismmagazine.com, August 30, 2002.)

Posted by Martin Lindeskog at 07:49 No comments: