How will you celebrate Independence Day? I will go to an American restaurant and sportsbar in Gothenburg in the evening. 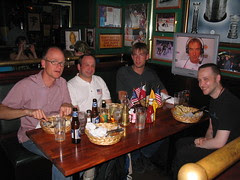 Pictures from the sportsbar. The waiter asked if we were Americans when he saw the historic flags (Continental flag, Gadsden flag, 1st Stars and Stripes (Betsy Ross), Bennington, and Star Spangled Banner with 15 stars). 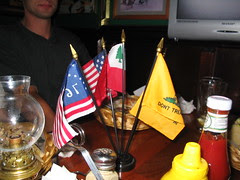 I had a "Larry Bird " sandwich (a BLT + smoked turkey and ham). You could find more photos at Flickr.

Here is an excerpt from Ian Hamet's post, Everybody’s American. [Via Accidental Verbosity.]

Being American is a choice.

And very often the best Americans are the ones who were not born that way.

Posted by Martin Lindeskog at 00:50