HOT AND SPICY PICK ME UP DRINK

I thought it could be a good idea to think about a drink with the following ingredients...: 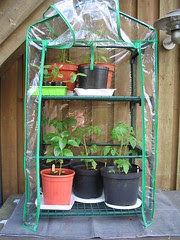 I did Absolut's test, "Find Your Flavor," and came up with pepper vodka. [Via Adrants.] Could you tell me about clamato juice? Does it taste like a mixture of tomato and clam? I understand that the Caesar cocktail is very popular in Canada. Maybe this could be a great pick-me-up drink?

I have had occasion, I fancy, to speak before now of these pick-me-ups of Jeeves's and their effect on a fellow who is hanging to life by a thread on the morning after. What they consist of, I couldn't tell you. He says some kind of sauce, the yolk of a raw egg and a dash of red pepper, but nothing will convince me that the thing doesn't go much deeper than that. Be that as it may, however, the results of swallowing one are amazing.

For perhaps the split part of a second nothing happens. It is as though all Nature waited breathless. Then, suddenly, it is as if the Last Trump had sounded and Judgment Day set in with unusual severity.

Bonfires burst out all in parts of the frame. The abdomen becomes heavily charged with molten lava. A great wind seems to blow through the world, and the subject is aware of something resembling a steam hammer striking the back of the head. During this phase, the ears ring loudly, the eyeballs rotate and there is a tingling about the brow.

And then, just as you are feeling that you ought to ring up your lawyer and see that your affairs are in order before it is too late, the whole situation seems to clarify. The wind drops. The ears cease to ring. Birds twitter. Brass bands start playing. The sun comes up over the horizon with a jerk.

And a moment later all you are conscious of is a great peace. (LiteratureCollection.com)

The following drink recipe is from Absolut's site.

Build over ice in a longdrink glass and fill up with clamato juice. Stir gently and garnish with a slice of lemon. (Absolut.com, Reality.)
Posted by Martin Lindeskog at 16:19