It looks like Chipotle will be a hot and sizzling stock. Could it be that the speculators are back in business? I wonder if McDonald's is planning to take stakes in other fast food companies in the future. The Swedish hamburger chain, Max, is growing very fast in Sweden and has become a popular contender to McDonald's.

Here is an excerpt from the article, Chipotle's Chef Has His Payday.

Ells, 40, has come a long way. A 1990 graduate of the Culinary Institute of America, Ells cooked for two years at Stars, an acclaimed restaurant in San Francisco. He then returned to Colorado with the aim of opening a high-end place of his own. Chipotle (pronounced chi-POAT-lay) would be his "cash cow" to underwrite it. Instead, the burrito joint, named for a dried pepper, became one and then two and then four. Now, the chain boasts 489 outlets and an estimated $600 million in annual sales. This year, it will open at least 80 more. (BusinessWeek.com, 01/27/06.)

As a "chilehead" and lover of chile pepper (including dried and smoked varieties like chipotle), I am sure that I could become a Chipotle Fan. 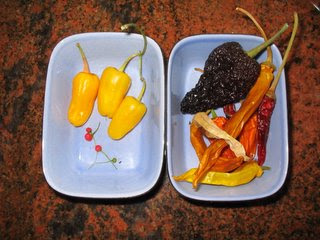 Fresh and dried chile pepper.
Posted by Martin Lindeskog at 11:40