Is the center of Europe moving in an eastern direction? Here is an excerpt from the article, BAA seals Budapest airport deal.

The number of passengers using the airport is rising sharply, boosted by the growth in budget airlines over the past 18 months.

Almost seven million passengers used the airport in the past 10 months, 27% higher than over the same period last year.

For a background, read my post, PRIVATIZATION OF THE AVIATION INDUSTRY IN HUNGARY. 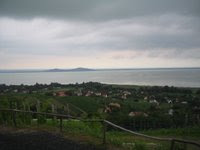 Another positive thing is that it will be cheaper to fly to Lake Balaton. Ryanair has used very aggressive marketing in order to boost the traffic. I hope they will survive after the new flight tax is taking place in July.

A new tax on flights from Swedish airports has been approved by the government and its partners in the Green and Left parties.

The tax, to be introduced on 1st July next year, will mean that economy class tickets from Sweden to other European destinations will go up by 96 kronor. Business class tickets to destinations outside Europe will cost 430 kronor more. (TheLocal.se, 12/22/05.)

Posted by Martin Lindeskog at 10:20