I must say that I agree with Daily Kos [via Findory] on this issue. Xinhua News Agency (XIN) is not an appropriate news source for OSM. I hope that Newstex will add more reliable news sources in the future, e.g., Radio Free Asia. 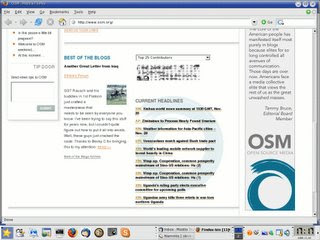 Here is an excerpt from the article, Xinhua: the World's Biggest Propaganda Agency.

Although it is more and more regularly cited as a credible source - nearly one third of the news reports on China selected by Google News originate from the agency - Xinhua, the head of which has the rank of minister, is the linchpin of control of the Chinese media.

Successor to the agency, Red China that was founded by Mao Zedong, Xinhua adopted its current name in January 1937. Since October 1949, this state-run news agency has been completely subordinate to the CCP.

The Reporters Without Borders' report includes accounts from several Xinhua journalists who agreed, on condition of anonymity, to explain how the control imposed by the CCP's Propaganda Department operates on a daily basis. With the help of former French journalist on Xinhua, Reporters Without Borders exposes the distortion of facts, hatred for its enemies (particularly the United States and Japan) and its support, through the treatment of international news, for the world's worst regimes. Despite a certain economic liberalisation of the media sector, Xinhua remains the voice of the sole party. Hand-picked journalists, who are regularly indoctrinated, produce reports for the Chinese media that give the official point of view and others - classified "internal reference" for the country's leaders.

After being criticised for its lack of transparency, particularly during the Sars epidemic, Xinhua has for last few months been putting out news reports embarrassing to the government, but they are designed to fool the international community, since they are not published in Chinese. (EpochTimes.com, 10/12/05.)