"There is no doubt that the new wave (of attacks) in Palestine will wipe off this stigma (Israel) from the face of the Islamic world," Ahmadinejad told students Wednesday during a Tehran conference called "The World without Zionism." (ABCnews.go.com, 10/26/05.)

Scott Holleran of the Concord Crier has the following comment:

CRIER COMMENT: this is a declaration of war, one of many in a long series of such statements -- but, now, having been left alone by the West, Iran may have the means to deliver a deadly blow to the West's young ally. (ConcordCrier.com, 10/26/05.)

Is the Islamic Revolutionary Guards Corps preparing for action on Qods Day? Go to Regime Change Iran for more information.

Related: My post, MAHMOUD AHMADINEJAD AND THE ATOMIC BOMB.

Here is an excerpt from Mary Jordan and Karl Vick's article, World Leaders Condemn Iranian's Call to Wipe Israel 'Off the Map'.

Virulent anti-Israel sentiment remains strong in the hard-line circles from which Ahmadinejad emerged to win the presidential election in June. "Israel Should Be Wiped Off the Map" was the slogan draped on a Shahab-3 ballistic missile during a military parade in Tehran a month ago. Six of the missiles, which, with a 1,250 mile range, could reach Israel, were the high point of the parade. "We Will Trample America Under Our Feet," read another banner. (WashingtonPost.com, 10/28/05.)

Another news item is that the mullahs have banned foreign films in Iran.

A committee of Islamic clerics in Iran, led by the country's new hardline president Mahmoud Ahmadinejad, this week banned foreign films in an effort to wipe out what they called "corrupt Western culture".

Elements that were specifically named as affronts to the government's vision of Iran's Muslim culture included alcohol and drugs, secularists, liberals, anarchists and feminists. (Guardian.co.uk, 10/26/05.)

For more comments on the situation in Iran, read the following posts: 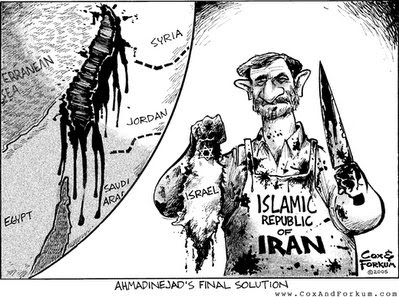 Gary Metz of Regime Change Iran sent me an email on the "World Without Zionism" poster.

If you follow the news you may have seen this picture, of Iran's President Ahmadinejad speaking at the "World Without Zionism" conference where he spoke of wiping "Israel off the map."
But in this photo you can only see a portion of the graphic. The rest of the graphic speaks a thousand words. (RegimeChangeIran.com, 10/29/05.)

If you search on "World Without Zionism," you will find the Union for Islamic Associations of Students, a.k.a Student Movement ("Zionot.ir"). For a background, go to GlobalSecurity.org and read The Zionist Entity and Iran.

Posted by Martin Lindeskog at 19:02