The cornerstone for the Freedom Tower [Editor's note: How about the nickname "slippery slope" building?] has been placed at the Ground Zero [link via Wizbang] . Gothamist has some interesting comments on the text on stone. Mary Hart has set up a great website called RestoreWTC.com. She described her site in an email message:

I have a website documenting the politics behind the World Trade Center rebuilding process, in which a handful of politicians deceived the public in order to keep tall, significant buildings from being rebuilt at Ground Zero. The site also has a comparison diagram showing the height difference between the Twin Towers and their intended replacement... Due to fears of terrorism, the intended replacement, dubbed the "Freedom Tower," is a full forty stories shorter than the original towers. The only thing making it the tallest building in the world is an unoccupied spire stuck on top of the roof to "simulate" the effect of a taller building without actually being one.

Here is an excerpt from the FAQ page:

The cornerstone for the Freedom Tower has been laid. Isn't it time to give up?

No. Although the cornerstone has been laid, no construction of any kind will take place until 2005.

The northwestern corner of the Ground Zero, where the Freedom Tower foundation is supposed to be built, currently contains one of the last remnants of the original WTC complex- A ruined six-story parking garage. The garage was left intact during the site cleanup because it helped prop up the slurry wall. However, it is structurally incapable of supporting the Freedom Tower. That garage must be demolished before any construction can begin.

The purpose of the Freedom Tower cornerstone laying was to create an appearance that progress was being made, in spite of the fact that even foundation work is at least six months away.

The design of the Freedom Tower's signature portions, and the design for most of the other proposed buildings, has not yet been decided on.


Resources on the Internet:
The Skyscraper Museum.
Great Buildings Online.


It is difficult for me to write this post without going back and think about the memories from my first trip to New York City in 1996. 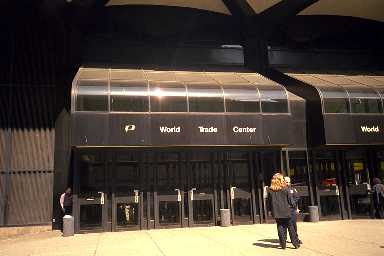 I want to illustrate the importance of New York City as a center of business and financial trading, by including Gay Gentry's painting, The Survivor. 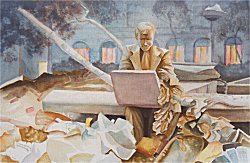 Here is description of the painting by Quent Cordair:

The painting is of an actual scene, of a "bench sculpture" in Liberty Plaza, next to the World Trade Center. After the terrorist attack of 9/11, the plaza was covered in rubble and debris. This sculpture was covered in dust, but withstood the event relatively undamaged. What I see in the painting is the American Businessman continuing his work, focused, unstopped and indestructible, granting not the slightest metaphysical importance to the terrorists and their desire to stop him.

I have stored a framed poster of Bryan Larsen's painting, A New Height, at a friend's place in Ohio. I look forward to the day when I once again could place the poster on a wall in my future home, somewhere in the Land of Opportunity - America...

Here is an excerpt from a letter by Quent Cordair:


My thanks to the artist, Bryan Larsen, who during the months in which others were plotting to destroy the World Trade Center, was busy creating, featuring the towers in an artwork which identifies and celebrates in theme all the towers stood for. The creation of this painting while others were targeting the painting subject for destruction was no coincidence; there is no irony in the timing. Each side identified the WTC as a vital symbol of America in these times; one side sought to destroy that value, the other to celebrate it and build on it. In retrospect, the artwork stands in memorial. The World Trade Center was not fully appreciated, by many, until it was gone.

May this image serve as inspiration as we recover and look to the future. Please feel welcome to share it with all, to remind ourselves, and the world, of who we are, undaunted and unbeaten. God bless America, those who built it, those who will build again, and higher. (Quent Cordair, 09/14/01.)

I want to end this post by giving you a great example on the right spirit coming from the "Big Apple," by directing you to NYC Newcomer weblogs and Catherine Shu's post (The Only City in the World) on the movie, The Day After Tomorrow [link via Andrew Medworth].

Posted by Martin Lindeskog at 04:04