In The Anti-Industrial Revolution, Miss Rand comments on the complaints about noise pollution:

Would you regard the following as an expression of love for man? This deals with another alleged pollution created by cities: noise. "Nor can the harried urban inhabitant seek silence indoors. He merely substitutes the clamor of rock music for the beat of the steam hammers, the buzz of the air conditioner for the steady rumble of traffic. The modern kitchen, with its array of washing machines, garbage-disposal units and blenders, often rivals the street corner as a source of unwanted sound."

Consider the fate of a human being, a woman, who is to become once again a substitute for washing machines, garbage-disposal units and blenders. Consider what human life and suffering were like, indoors and out, prior to the advent of air conditioning. The price you pay for these marvelous advantages is "unwanted sound." Well, there is no unwanted sound in a cemetery.

I have never really found it difficult to deal with the noise of my appliances: What I usually do is put a load into the washing machine and the dishwasher, start them, grab a book, and head out into a park to do some reading. After an hour and a half, I'm back, and my clothes and dishes are clean. Today, for example, I read three chapters of Eli Goldratt's It's Not Luck--an activity that is certainly much more pleasant, and also more productive, than washing all my stuff by hand.

On my way back, I noticed a cute little kitten hanging about by the roadside. "Hey," I thought as I slammed on the brake, "here's my chance to follow in the footsteps of Martin and Elizabeth!" It was only then I that realized I didn't have my camera with me. But another "source of unwanted sound," my cellphone, saved the day for me. I'll still need to improve my technique of luring the cat into a proper position relative to the sun, and obviously, I'll have to remember to have my real camera with me next time--but still, I can proudly proclaim that, as of today, 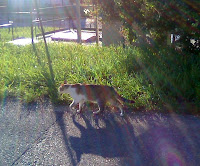 I have made my entry into the world of catblogging! 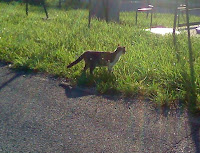