Every five years, the three men of Apollo 11 get together to face the cameras [...] Now it's been 40 years since that historic touchdown on July 20, 1969, and the spotlight is once more shining on the famous trio.

The main event takes place Sunday night, when Aldrin takes his place alongside Apollo 11 crewmates Neil Armstrong and Michael Collins for a lecture at the National Air and Space Museum. Apollo flight director Chris Kraft and former senator-astronaut John Glenn are also due to attend. Although the event is sold out, you should be able to catch it on the NASA TV Webcast.

See the original post for many more links. Also, visit the mission page on NASA's website and check out their anniversary features, including an interactive animation of the entire landing site.

And while you are there, don't miss this related item from the Current Missions section: 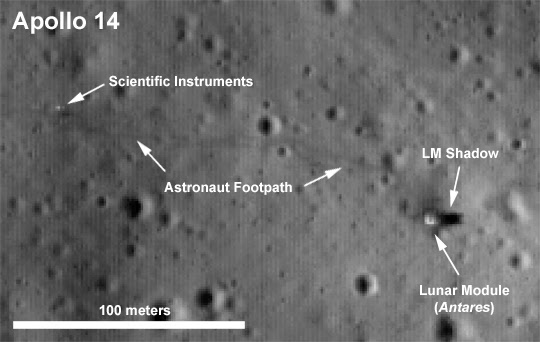 Although these pictures provide a reminder of past NASA exploration, LRO's primary focus is on paving the way for the future. By returning detailed lunar data, the mission will help NASA identify safe landing sites for future explorers, locate potential resources, describe the moon's radiation environment and demonstrate new technologies.