WWJD WITH A GPS

"Trettodag jul" ("thirteen days after Xmas" in Swedish) is on January 6. In Sweden you celebrate Xmas on December 24, so that is why you say thirteen days, instead of Twelve Days of Christmas. It is time for Jesus to jump in his car and show up for his manifestation. [Editor's comment: I wonder if YHWH, a.k.a God has installed the car with a GPS... What would Jesus do?]

I rarely bother to beat dead horses. God is a dead horse, although religion is not quite as dead as most atheists believe, because it is alive and snorting and being harnessed to contemporary American politics. That is religion’s special danger; churches of all stripes and sects are enlisting their congregations in the army for various welfare state, environmentalist, and collectivist crusades. Their primary object is to resurrect the country’s alleged “Christian” values and rid that “Holy Land” of the infidel, the atheist, and incidentally clean up the earth, stop global warming, and herd everyone into a welfare state corral. It is God’s will, they say, to take care of the lame, halt and poor by impoverishing the healthy, the independent, and the industrious. (Rule of Reason, January 3, 2008.)

I have added The Portable Atheist: Essential Readings for the Nonbeliever and Sparrowhawk Companion to my wishlist.

Robert Tracinski is endorsing Rudy Giuliani in the latest issue (Vote for Rudy. Support the Defense of Freedom over Religious Politics.) of The Intellectual Activist Daily newsletter.

With the opening of the primary season—tonight's Iowa caucus isn't a real primary, but it is the first test of candidates' support among grass-roots activists, and thus it will have an impact on the primaries to come—now is the time to give TIA's official endorsement for the Republican primary.

I say that this is my official endorsement, because it has been clear where I've been leaning, unofficially, for most of the past year: I support Rudy Giuliani as by far the best candidate for the Republican nomination. He is the only candidate who will promote the influence of what I call the "secular right": support for free markets, a strong national defense, and strict separation of church and state. (TIA Daily, January 3, 2008.)

[Editor's note: Please vote in the Pajamas Media Presidential Straw Poll. Scroll down the right column and look under the section EGO poll.]

[Editor's comment: Have you heard about Betty Bowers & her "invisible running mate"? ;)]

Men of Hope by Mike Allen of Politico.com.

The big winner in the Iowan caucuses is Jesus Christ. Mike Huckabee and Barack Obama are the two most religious -- politically religious -- candidates of their parties. I'm surprised that those candidates came in first. However, I don't believe that they'll win the nominations (though I think it likely that Obama joins somebody else's ticket). Indeed, I would be stunned if either candidate made it to the general election. If both make it, that will demonstrate that this country is in worse shape than I thought, and that we are likely headed toward more expansive religious-based politics. (Ari Armstrong, January 4, 2008.) 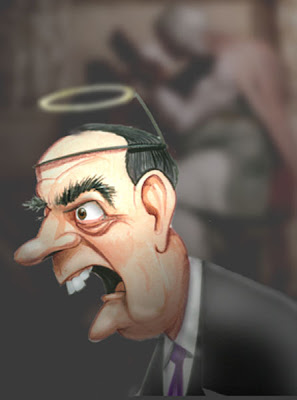 In the news: Onward superstitious soldiers! Is Huckabee God's choice tomorrow in Iowa? - "Deadline USA" - The Guardian Blog.
Posted by Martin Lindeskog at 16:38