Martin continues to make the mistake of allowing me access to his wonderful blog. Thought I would invade with this which is also at my blog. Thanks Martin.

The situation in the Islamic world, compounded by the Administration's inability or unwillingness to come to grips with the reality of the jihad ideology, indeed make it quite likely that Dubai Ports World will be sending at least a few mujahedin to work in these American ports, and that they will be able to work there unhindered. After all, no one in Washington is yet even asking the right questions of self-proclaimed moderates about where they really stand on jihad and Sharia issues.

This is odd. Even odder, Bush is threatening a veto. Has he vetoed anything in six years? Any kind of veto on absurd spending? No. But this?

"After careful review by our government, I believe the transaction ought to go forward," Bush said. He added that if the U.S. Congress passed a law to stop the deal, "I'll deal with it with a veto." [Reuters]

Why does this not make me feel better?

"My presumption is, and my belief is, that the president and his secretary of state and the Defense Department and others have adequately cleared the Dubai government organization to manage these ports," [Jimmy] Carter told CNN. "I don't think there's any particular threat to our security."

So has the president gone mad?

Or is there a much, much bigger picture? Look at this map from Lonely Planet: 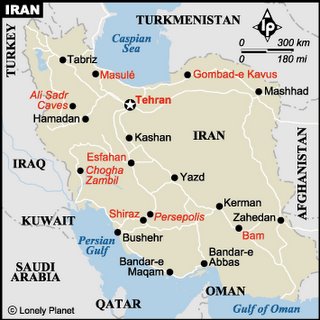 Can you say surround?

Also, back in 2004 I quoted a small Playboy article entitled "What Would A Second Bush Term Hold For U.S. Policy?".

"Clues can be found in 'Rebuilding America's Defenses,' a think-tank report released two months before the 2000 election by the Project for the New American Century. It provided a blueprint for what would become the Bush administration's militaristic foreign policy. From the report, here's what's left to do: (1) Retain "forward-based forces" in the Gulf. (2) Focus on Iran. Though Iraq 'provides the immediate justification' for 'a substantial American troop presence in the Gulf,' Iran is cited as an equal threat...."

If this not madness and in fact part of a military deal, that would explain why Bush is so adamant and threatening to veto. It may also explain why Senators Schumer and Clinton are going crazy. They may see what Bush is doing.

We shall see whether this is madness (and my worst fears about the Bush family coming true) or genius (that W is not his father and does have some American cowboy spirit).

UPDATE: Not much change on the March 07 Airstrike Against Iran contract.

See more at intrade.
Posted by Exalted Moments at 05:58