If You Wanna Keep Your Bookmarks...

Zach Oakes has written up a quick review of several "social bookmarking" services he recently tried out.

My computer (like all Windows machines I’ve ever used) is starting to slow down, freeze, and not respond to mouse movements, so I’ve decided to protect the most valuable data I have on it.

My files? Hell no. My bookmarks. I have about 1000 of them, and I would rip my hair out if I lost them. So I investigated social bookmarking sites where I could upload them and keep them safe (setting the bookmarks as private, of course - I have no interest in sharing them).

Me? Nah! I don't use bookmarks that much myself, but I enjoyed reading the review and I figure that plenty of my readers might like the information.

A Couple of Posts Worth Bookmarking

I mentioned them already, but here are two good roundups on the Moslem cartoon riots.

Mark Steyn on the "Courage" of the Left

Willy Shake reminded me of an item I meant to blog recently, a Mark Steyn piece on the Moslem cartoon riots. Steyn is one of my idols. He is always very funny and always on target. What I liked most was the bit right after what Willy quoted:

The cartoons aren't particularly good and they were intended to be provocative. But they had a serious point. Before coming to that, we should note that in the Western world "artists" "provoke" with the same numbing regularity as young Muslim men light up other countries' flags.

When Tony-winning author Terence McNally writes a Broadway play in which Jesus has sex with Judas, the New York Times and co rush to garland him with praise for how "brave" and "challenging" he is. The rule for "brave" "transgressive" "artists" is simple: If you're going to be provocative, it's best to do it with people who can't be provoked. [bold added]

That one sentence in bold captures the common denominator behind so much of what the left (and not just its "artists") does like clockwork -- unless there's an important point to be made. Take Google, with its leftist bromide about "do[ing] no evil" as an example. With which country's government is it fighting tooth and nail, and with which has it agreed to help keep the proles -- er, its customers -- down? Hint: If I had to pick only one of these battles to fight, it wouldn't be this one.

So much of the left's posturing is just that. Its days as a force for the defense of freedom of speech, and of individual liberty are over.

But Some American Papers Did!

In a post which has drawn comments from all over the world, I had originally chided the Inquirer for not publishing the cartoon, and said I'd apologize for my post's title -- ("Cartoons your newspaper won't let you see") if they did. Much to my surprise, the Inquirer first linked to the cartoons, then ran the hard copy above, which I scanned and put into the post. Despite the fact that the post continues to draw comments, it's no longer on the front page of the blog, hence the need for a new post. With a new title! (As Michelle [Malkin] notes, the Inquirer is joined by the New York Sun, the and the Riverside Press Enterprise.)

It was very brave of the Inquirer to do this and I agree with Michelle:

The point that needs to be hammered again and again is that the newspaper did not publish the cartoon to deliberately offend Muslims or to make an anti-Islamist statement, but to inform. Which is what newspapers, may I remind them, are supposed to do....

Look at the Protestors

Bothenook points to an excellent pictorial by Varifrank on the protests. This makes some excellent points besides being funny. 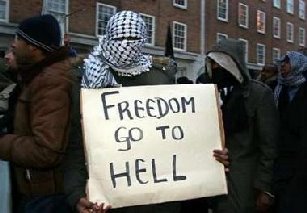 This guy was probably born into poverty in the Middle East and was forced to leave the country of his birth to survive, only to arrive in Christian infidel England where he was given asylum, human rights and a monthly stipend from the good people of the United Kingdom and Her Majesty, the Queen. All that work and sacrifice, just so he could go into "Shiny Londontown" and protest "freedom"; something he probably craved to do every day back on the streets of Cairo, but never had the right to do and if he did his fellow righteous Islamic brothers would have simply had him killed for speaking out. But here he is, enjoying more freedom and wealth than he has ever known in his life, so what does he decide to do? Thats right, in the words of Groucho Marx "he's against it". Of course he has no intention of returning to a place that has no freedom, because "that would be wrong".

The others are also quite good.

Bruno T. Raymundo brings up two quotes at his blog, The Simplest Thing. Each is from a different context than the cartoon riots, but each is relevant to them and to the greater conflict of which these are just a battle.

First, there's this quote by Tolkien, which I agree, conveys the right spirit for the times.

Hold your ground, hold your ground. Sons of Gondor, of Rohan, my brothers. I see in your eyes the same fear that would take the heart of me. A day may come when the courage of men fails, when we forsake our friends and break all bonds of fellowship, but it is not this day. An hour of wolves and shattered shields, when the age of men comes crashing down, but it is not this day. This day we fight! For all that you hold dear on this good Earth, I bid you stand, Men of the West!

And then there's one from Ayn Rand's Capitalism: The Unknown Ideal, published over forty years ago.

The only power of a mob, as against an individual, is greater muscular strength -- i.e., plain, brute physical force. The attempt to solve social problems by means of physical force is what a civilized society is established to prevent. The advocates of mass civil disobedience admit that their purpose is intimidation. A society that tolerates intimidation as a means of settling disputes -- the physical intimidation of some men or groups by others -- loses its moral right to exist as a social system, and its collapse does not take long to follow.

Back then, it was the (then-) New Left, today's establishment ally of the Islamofascists, who were staging the violent protests. This is not a coincidence.

Andy over at the Charlotte Capitalist has a good list of books on the history of ideas you might want to peruse.

If you are interested in today's politics, it is important to understand the power of ideas. It is extremely helpful to have concrete examples of how ideas drive actions. That is the realm of the history of ideas. How cultures have viewed reality, how men know things, and how men should act have driven history.

Competing philosophies have dominated in various eras. At the bottom of this post is a listing of Wilhelm Windelband's eras. The ... list of books cover some or all of the eras.

Submarine blogger Bubblehead won some national media exposure for himself when he and a WaPo writer butted heads.

In summary -- yes, it was kind of silly to focus on Arkin's factual errors in his original post. But, as I said in the comments to that post, I really couldn't figure out what the point was he was trying to make. Now that he explained that it wasn't about the cost of the Virginia class boats, I can figure out that I still don't have a clue. That's OK, though... I've posted lots of stuff that confuses my readers. I'm just not representing a major newspaper.

And on a completely different tangent, Bubblehead points to a fascinating story about a communicable cancer that is threatening the Tasmanian Devil. Here is his quote from a BBC article.

"But while many scientists had suspected a virus, Anne-Marie Pearse, a researcher for the state of Tasmania who co-wrote the article in Nature, found abnormalities in the chromosomes of the cancer cells were the same in every tumor.

"Pearse and her colleague Kate Swift discovered that, while the normal complement of chromosomes in the devil is 14, the tumours contained 13, which were grossly abnormal. These chromosomal rearrangements were identical in tumours from all 11 animals studied by the scientists.

"This offers support for the idea that the disease apparently began with a single sick devil, probably in the mid-1990s, that directly spread the cancer cells by biting other animals. The authors propose that cancer cells are dislodged from one animal and essentially transplanted to another as a result of bites inflicted around the mouth.

"Devils jaw wrestle and bite each other a lot, usually in the face and around the mouth, and bits of tumor break off one devil and stick in the wounds of another," said Ms Pearse.

This reminds me of a cell line used in cancer research that is very difficult to control and tends to contaminate other cultures.

Myrhaf notes that an establishment Democrat is spouting conspiracy theories.