I prefer to do some catblogging instead of talking politics, after the recent incidents in Sweden and America. 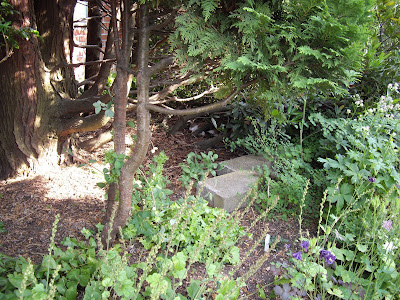 Do you see "camouflage" Morris?

But after an exchange with Larry Robiner on Twitter, I had to write a post on today's situation and what could come in the future.

@lyceum yes, "everything is possible" in free America, including the election of George W. Bush to president. TWICE! Why is that so great??
3:33 PM Jun 21st from Seesmic Desktop in reply to lyceum

@LRobiner Here is an example of "American in spirit," my post http://bit.ly/NvNZB
3:19 PM Jun 21st from web in reply to LRobiner

@lyceum what does it mean to be "an American in spirit"?
2:24 PM Jun 21st from Seesmic Desktop 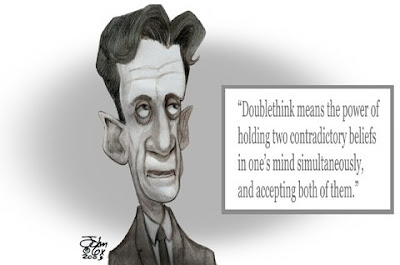 and now a word from George Orwell...

I would have been hesitant to vote for George W. Bush the second time around. The first time I would probably vote for him on his "cowboy merits," and as a protest vote against Al Gore. I wonder what will happen next. Could supporters and the leading members of the "Grand Old Party" get their act together and find a decent candidate next time? I am not sure about that. The problem is what you could end up with Hillary Clinton as a "comeback kid"... I don't think that Obama will manage another period.

Here is an excerpt from Glenn Beck's interview with Barry Goldwater, Jr.:

GOLDWATER: And we have a two-party system and that system basically, historically has worked well.

I think the Republicans have gotten off-track. My father, Senator Goldwater, set the tone for the conservative movement back in 1964, established a philosophy which appealed to a lot of people and still do today — and that's less government, protecting our liberties, personal freedom, personal responsibility, a strong national defense and a free market.

Those are the core principles that Senator Goldwater and also Ronald Reagan adhered to, were spokesmen for and governed by.

But in the '70s, all of a sudden, under Ronald Reagan, they started to embrace religion. And they began getting these personal issues into the political spectrum. And as a result, we're — we are constantly debating wedge issues — like abortion, prayer in the schools and the definition of marriage.

And we've gotten distracted and away from those core principles. And the Republican Party needs to get back to that. (Fox News, June 3, 2009.)

Listen to Yaron Brook's speech at the Republican Party of Virginia 2009 State Convention (Part 2 of 2). You could listen to the first part if you go to the featured video section on this blog.

On a personal level, I am very interested to find the right political climate in my future "neighborhood". Please continue to give me tips on places that you think could match my views and profile. How did you celebrate Flag Day? How will you celebrate Independence Day? Are you attending a tea party? Read Sylvia Bokor's post, Tea Parties and Going John Galt: America's New Direction?, Edward Cline's post, The New Sons of Liberty and Zev Barnett's post, In Defense of Liberty as intellectual ammunition and preparation for the future...

Posted by Martin Lindeskog at 23:33