I will write a post on voting for John F. Kerry or George W. Bush in a later stage of the election campaign. I will also point out why a third party candidate is not a real option. In the meantime, please take a moment and think about the next candidate for the Republican Party. Here is a comment by Robert Tracinski on John Fund's article, Tryout Time:

The convention is a good opportunity to assess potential Republican candidates for 2008. This article lists some of the likely leaders, and they range from bad (the powerlusting John McCain) to mixed (Rudy Giuliani, who is good on terrorism and abortion, but launched his career by persecuting businessmen) to some who seem very good (the pro-abortion, anti-big-government Mitt Romney). (TIA Daily, What Is This Election About?, 08/30/04.)

Here is a trend search by Intelliseek's BlogPulse: 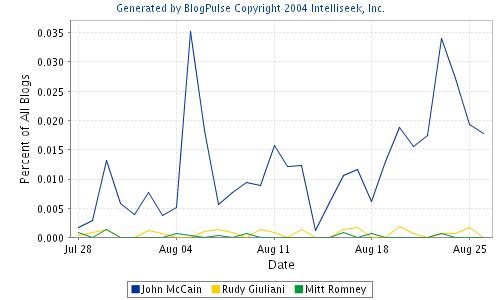 [Hat tip to Anita Campbell.]
Posted by Martin Lindeskog at 17:18