You should be, according to your Masters benevolent caretakers.

A simple boat could be used as a weapon.

"Just the fuel, this has 85 gallons in this boat and that's bomb itself," said Singleton.

The head of the U.S. Coast Guard is throwing around a couple of ideas on how to keep you safe.

One would require licenses for all boaters in all states.

The other would call for transponders on recreational boats so authorities can track their location.

Translation: "We hunger for more power, but we need an excuse to get it and this is the best we've been able to come up with." I think it's pretty lame. There are thousands of things that can be turned into deadly weapons: boats, cars, dogs, drinks, e-mails, bananas, box cutters, and even your bare hands. You can't require licenses for everything; not even the worst totalitarian state could. And besides, licensing isn't going to make anyone safer if you refuse to "profile" the licensees!

"Anything to improve our coast and help everybody out, we need to do it. [...]" said Singleton.

Anything? Really anything? Even something that would actually work, aimed at the people that actually want to kill us? 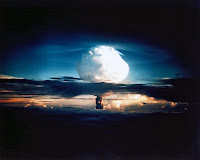